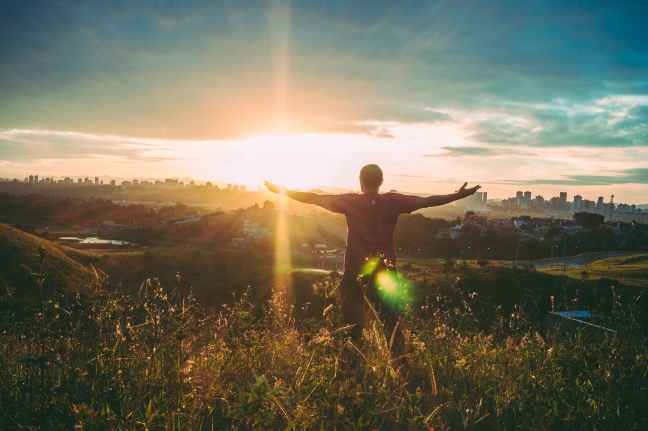 “Out beyond ideas of wrongdoing and rightdoing, there is a field. I’ll meet you there.”

Years ago, I belonged to a small group of women who met every full moon to meditate together and receive insight.

During one such meditation in my home studio, my long-time, dear friend received a great insight indeed. She had what I’d call a gift meditation. She shared with us how she was shown much dichotomy in the world. And when faced with differing perspectives, one should hold each of them equally, and simply sit between them in acknowledgement.

Wayne Dyer told the story of how he gave away all of his possessions. And they all returned to him. In various forms.

One one hand, we are told to let go: give away what we no longer need.

On the other hand, we are told to be grateful for what we have and make good use of it.

We are told to surrender.

We are told to work hard for what we want.

So, which is it? Do you get up today and knock all the items off your list?

Or do you saunter through your day, open to the energies that be?

Right and wrong choices. We face them every day, especially in parenting.

Often we are frozen due to fear of making the wrong choice. Or hard on ourselves, demanding the right choice be made.

For years I’ve loved the line from Rumi’s famous poem. I always saw the field of long wild grasses in my mind’s eye.

Last year, and again this past weekend, I watched Diana, the movie about Princess Di’s life. Don’t judge me! Naomi Watts gives a wonderful portrayal. At the end, and we all know how it ends, Naveen Andrews who plays Dr. Hasnat Kahn (who Diana had dated) walks up to Diana’s memorial at the gate and places white lilies among the sea of offerings. Then he tucks a note behind them, which reads:

From the poet Rumi

“Somewhere beyond right and wrong there is a garden.

I will meet you there.”

Something deep inside me felt overjoyed with the word, more than a word, an image: the beauty of the garden.

When I find myself caught in the dichotomies of the world, or the smallest decision, I recognize both sides equally, and then I walk into that garden and rest.